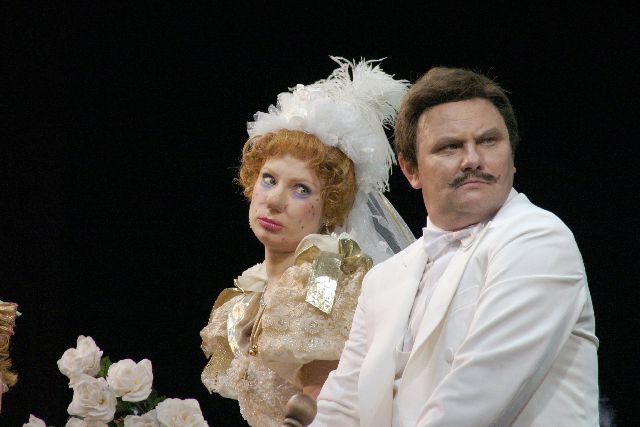 June, 2 at 7 p.m. the
curtain-up of the play “If you run after two hares…” will be held
for the last 459-th time; the first-night October 28, 1997. This comedy was staged
by Alexander Gorban, stage-designers  –
Boris Valuev and Maxim Osvetimsky, costume-designer – Svetlana Sinitsyna,
choreographer – Sergei Zarubin.

The production has
lived a long and happy life. The actors varied, but creative collaboration of
different generations of Vakhtangov actors (the senior, middle and younger
ones) remained unchanged; the participation in crowd scenes has become a good
school for many young  actors of the
theater.

Three distinctive parts of Prony Prokopovna have been developed over the past
years by the actresses: Maria Aronova, Olga Tumaykina and Anna Antonova. More
than 15 years Michael Vaskov plays the part of the fortuneless  gigolo Samokhvalov . Over the years, the audience
could witness Andrey Zaretsky and Victor Dobronravov in the part of
Golokhvastov.

Yuri Kraskov and Alexander Galevski on June,2 will play their 459 time.Dimchenko Irina, Olga Chipovskaya, Andrew Zaretsky, Alexander Ryschenkov, Lydia
Konstantinova, Elena Melnikova, Inna Alabina, Nina Nehlopochenko, Eleanor
Shashkova, Elena Ivochkina, Olga Gavriliouk, Alexander Pavlov, Evgeny Fedorov,
Irina Kalistratova are still present in the production.This mischievous and funny performance is always characterized by constant
full-house. During its touring history many cities were visited in Russia,
Ukraine, Belorussia…But
there comes a time, and June, 2 we invite you, dear audience, to
participate in the pursuit of “two hares” for the last time and express
your gratitude to the actors and play’s director.