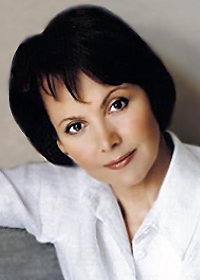 V. Novikova has been working on the Vakhtangov Theater stage for nearly 35 years.

She was invited to join the company in 1979, being a graduate and one of the best students of the B. Shchukin Theatre Institute (E.Simonov and V.Lvova course).

Her debut role was Olga Solyanik (Truth of memory), Sophia (Ladies and Hussars), Anne, a daughter of a forester (the Wounded), Laura (Little Tragedies), Zelima, the slave of Turandot (Princess Turandot), etc.

Her charm and incredible femininity has captivated the theatre audience literally from the outset. However, her creativity allowed her to play brilliantly bright character roles as well: the 1st irresponsible lady (Zoyka’s apartment), Khimka (If you run after two hares…) and Felisata Mikhailovna (Uncle’s Dream).

The director and choreographer Angelica Cholina, directing her first production on the stage of the Vakhtangov theatre “The Coast of Women” in 2008, was immediately attracted by the fine features of the actress and invited V.Novikova to take part in her performance in duet with Valery Ushakov «Peter». The following work of V.Novikova for A. Cholina was the role of the Countess Vronsky in a choreographic performance based on the novel by Leo Tolstoy “Anna Karenina”.

In 2011, Vera Novikova created a new magnificent part of the actress Schipalina in a performance directed by Oleg Forostenko “The farewell tour” (based on the play by Y.Edlis ).

Together with Vladimir Etush Vera Novikova plays in two productions: “Uncle’s Dream” by F.Dostoevsky and “The Price” by A. Miller (a fragment from “The Haven”). Vladimir Etush is very gracious about his partner. They often go on tour together and take part in concerts. That is why, when a need arouse to introduce the second actress into the production “Okaemovs’ Lifetime”, Vera Novikova was engaged as Vera Mikhailovna.