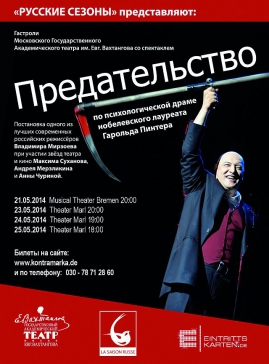 The Vakhtangov Theatre’s production of “Betrayal ” was invited to Germany’s largest theaer festival Ruhrfestspiele, where it will be performed May 23 , 24 and 25. May 21, on the eve of the festival, the audience will see the production of “Betrayal” in the North Germany, on the stage of the Bremen Theater Musical Theater in Bremen. This year the festival Ruhrfestspiele is dedicated to the memory of Maximilian Schell – the world-famous actor, director, producer and the “Oscar”-winner. “The Awakening and Utopia” is a slogan that this time was chosen by the organizers of Ruhrfestspiele. This year the festival refers to the origins of modernism, which originated in literature and drama in the beginning of XX century. The Festival will present a total of 100 performances. Festival Ruhrfestspiele, first held 70 years ago, is considered one of the most important European theater forums . Last year edition was dedicated to Russian literature and gathered the audience of about 80,000 persons in all. The festival runs until June 16.