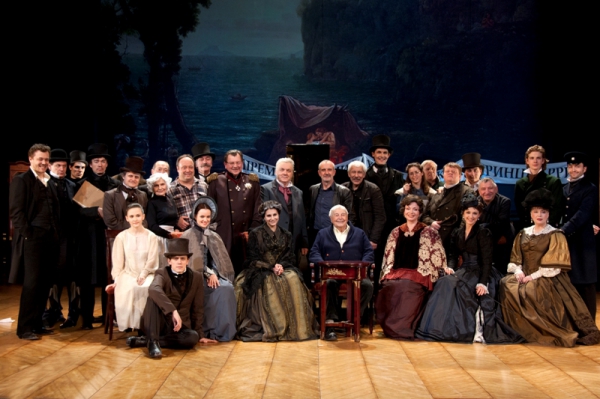 The production of “The Demons” by Yuri Lyubimov was shown in China. This is the first Lyubimov’s work after he left from the Taganka Theatre. He directed this production based on the novel by Fyodor Dostoyevsky on the stage of the Vakhtangov Theatre, where his career as an actor and director began. “The Demons” directed by the outstanding director Yuri Lyubimov, who passed in September, will be played for the Chinese audience in the framework of the of the Theater Olympics festival in Beijing, December 19, 29 on the stage of Beijing Tianqiao Theatre. The Beijing tour has been planned while Yuri Petrovich still alive, and was dedicated to his memory. A letter of Katalin Lyubimova, the director widow, was read out in Chinese to the audience before the performance. She expresses in the letter her gratefulness to those who helped to bring the latest dramatic Lyubimov’s performance to Beijing. “This performance is directed in the alma mater, the Vakhtangov Theatre, where my husband started his theatre career – Lyubimova said. He worked easily, with great enthusiasm and joy, because he was understood by young actors who took his art seriously. There’s been a happy mutual understanding and respect in their work. Yuri Petrovich hoped to bless his performance, standing on this stage in front of you. I beg you to take this performance with an open heart.”