The whole article is avalible at:

There is a timeliness to the Vakhtangov Theatre’s forthcoming visit to London.

The much-lauded company, founded in 1920 as an offshoot of Stanislavsky’s Moscow Art Theatre, is strengthening cultural bridges.

The Vakhtangov first visited the capital with ‘Uncle Vanya’ at the Noël Coward Theatre in 2012 that the Independent praised for its “blackly comic abandon”, and then with a version of Pushkin’s ‘Eugene Onegin’ at the Barbican in 2015, which the Guardian pronounced “dazzling”.

This time, the company’s Lithuanian artistic director Rimas Tuminas is bringing a new play to the Barbican. ‘Smile Upon Us, Lord’ is a moving and evocative adaptation from the novels of Tuminas’s countryman Grigory Kanovich, about the journey of three elderly Jewish men to Vilnius before the First World War. 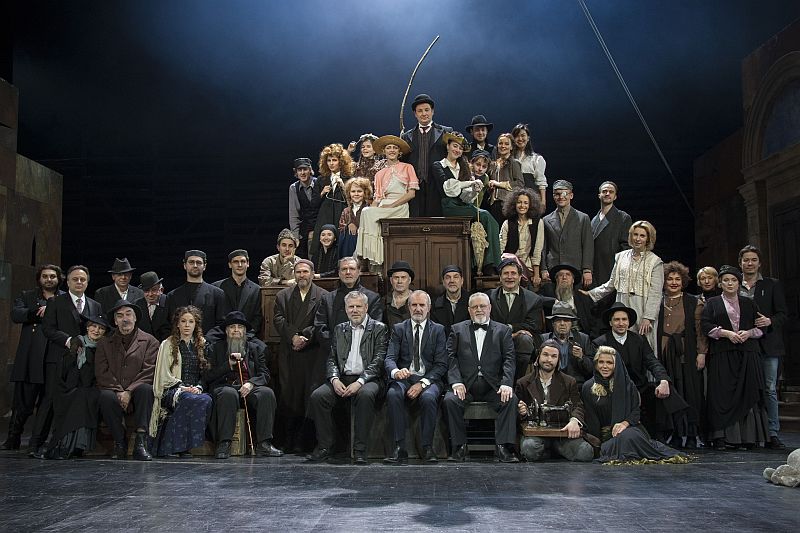 “It is not just a Jewish story, it is universal,” says Oksana Nemchuk, the producer behind the company’s international tours. “This production is about many things: about children, life, about humanity. Everyone will find something for themselves. We are all on a journey and it’s important to have a feeling for other people.” Again, with prejudice in general, and anti-Semitismin particular, resurgent worldwide, this feels timely.
The show’s three main characters are spurred to leave their shtetl for different reasons. The stone-cutter, Efraim, hears that his son has been arrested after shooting the governor in the capital. The water-carrier, Schmuel, has dreamed that his son has returned in glory from America, laden with gold pocket watches to hand out to friends and family. And Avner, who lost his family and his store in a fire and has become a beggar, just wants to go along for the ride. The trio are played by Sergey Makovetskiy, Evgeny Knyazev and Viktor Sukhorukov, leading actors in the Vakhtangov’s permanent, 100-strong ensemble, and familiar to Russophile London audiences from their roles in Vanya and Onegin.

The mismatched trio’s journey involves many picaresque encounters and much musing on life, death and humanity. “A human is a beast not when he kills, but when he forgets that he has killed,” as Efraim says. The men pick up a mysterious trickster figure who supplies comic relief, and a black-clad man with a violin case who can stand on hot rocks in a bathhouse without burning himself. Is he a gangster, a demon or a symbol of Jewish (or human) resilience? A gypsy horse thief transmogrifies into a log, while Avner dreams of rebirth as a tree. They are menaced by soldiers, who also represent wolves, or fire, or perhaps all the destructive forces that will threaten Europe’s Jews in the years ahead.

The lack of concrete meaning adds to the slow spell the show casts. It has a rich, soulful texture rarely if ever seen on the London stage. The performances are quiet, unshowy, the supporting ensemble investing as much in playing goats or children as the leads do in the protagonists. The score is particularly stirring, especially when the men set forth at the start of each new scene, on a cart symbolically created out of shtetl furniture, a flung handful of corn stirring both the violin and Schmuel’s old mare into life. The ending, which I won’t spoil, is crushing.