De Utvalgte is an autonomous theatre company that has made its mark during the last fifteen years by displaying a desire to seek new expression, but also new content in the stage arts. Founded in Oslo in 1994 after the group’s original line-up graduated at the Nordic School of Theatre in Denmark.

The company consists of Kari Holtan, Boya Bøckman, Torbjørn Davidsen, Anne Holtan, Morten Kippe, and link up with other artists as needed. 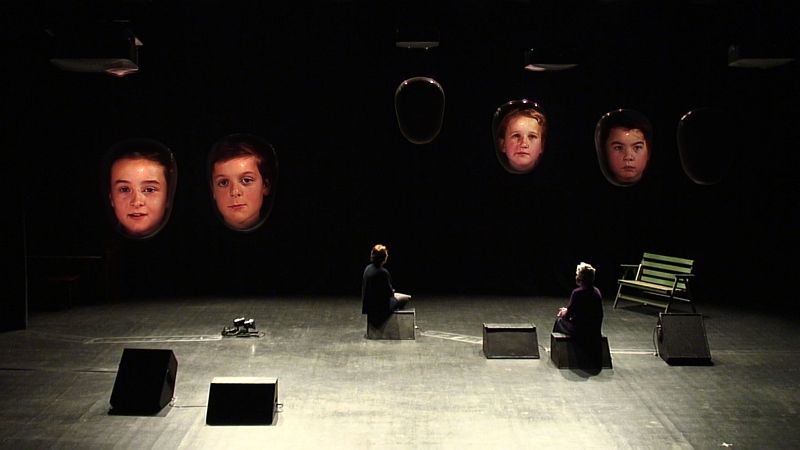 De Utvalgte deals with contemporary theatre and their performances are moving in the borderland between theatre, visual art and performance. They create a distinctive and multifaceted expression through the assembly of self-made instruments such as video, text, sound and music.

De Utvalgte has as the first in the world developed new technology that uses 3D film scenography and narratives.

The performances often have a cast consisting of people with and without acting experience. This adds a dimension to the play with roles and identities, authenticity and theatricality.

The company mixes the comic and the tragic in bold ridicule of their own and others’ inadequacies.

Director Kari Holtan: “Shadows has its own universe, open, clear and at the same time disturbing and enigmatic. ‘Everything is now and everything is always’. The fact that time and space are dissolved allows me as a reader to recognize my own unease. They exist in an immaterial room in a state of zero, where memories of a life together is the only evidence. The text challenges to ask existential questions and wonder who we are and how we leave traces in each other’s lives”.

The drama seems to unfold in an abstract landscape that stands in strong contrast to the text physical quality. The outer storyline is almost absent. The characters are interconnected in various ways: Child-parenting, marriage and infidelity. It is now buried as emotional memories come to the surface as sensual experiences. It is also unacceptable and frightening because there is no longer a motive for action. In this play all of the text is performed by children from 6 to 10 years, exposed in video projections. During the production period De Utvalgte Video recorded the children’s faces while they were instructed to perform the text of the various roles. This footage was later edited to be projected at six cocoon-like heads casted in plastic. On the stage four elderly people are wandering without saying a word.