National Artist of the Russian Federation. Laureate of the State Prize of Russia. Holder of the Order of Honour.

Sergey Makovetskiy is adored by public, recognized by critics and required by directors because of his magnetic energy and his skill to suggest new ideas in every production, to make a sparkle of wit and humor and to be absolutely sincere in the most tragic story. He is well-known by various audiences of different ages because he is invited as a celebrity voice actor in animated movies.

Selected works in other theatres include: ‘M. Butterfly’ (by David Hwang) and ‘Catapult’ (by Nikolay Kolyada) in the Roman Vityuk Theatre; Malvolio (‘The Twelfth Night’ by William Shakespeare) in the K.S. Stanislavsky Theatre; Henry Higgins (‘Pygmalion’ by Bernard Shaw) at the Sovremennik Theatre; Kovrin (‘The Black Monk’ by Anton Chekhov) at the Moscow Theatre of the Young Spectator.

Sergey Makovetsky appeared on screen in ‘The Life of Klim Samgin’ by Maxim Gorky directed by Viktor Titov. He found box office success in the movies by Vladimir Khotinenko ‘Patriotic Comedy’ and ‘Makarov’. Selected filmography includes ‘The Russian Mutiny’, ‘Brother 2’, ‘The Key from the bedroom’, ‘72 Meters’, ‘It Doesn’t Hurt Me’, ‘The Russian Game’, ‘Seduction’, ‘Roly-poly toy’, ‘Liquidation’, ‘Dushka’ (‘Lovely thing’), ‘12’, ‘Live and Remember’, ‘The Priest’, ‘The Case of Gastronome #1’, ‘Peter I’, ‘The Last Will’, ‘Life and Fate’, ‘The Girl and Death’, ‘Two Winters, Three Summers’, ‘Demons’, ‘Quietly Flows the Don’.

Sergey Makovetskiy is a holder of around 30 Russian and foreign theatre and movie awards, special government awards including the Order of Honour of the Russian Federation, the State Prize and Mayor of Moscow prize in the area of literature and the performing arts. 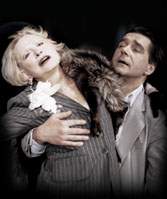 The most unpredictable actor is at your service